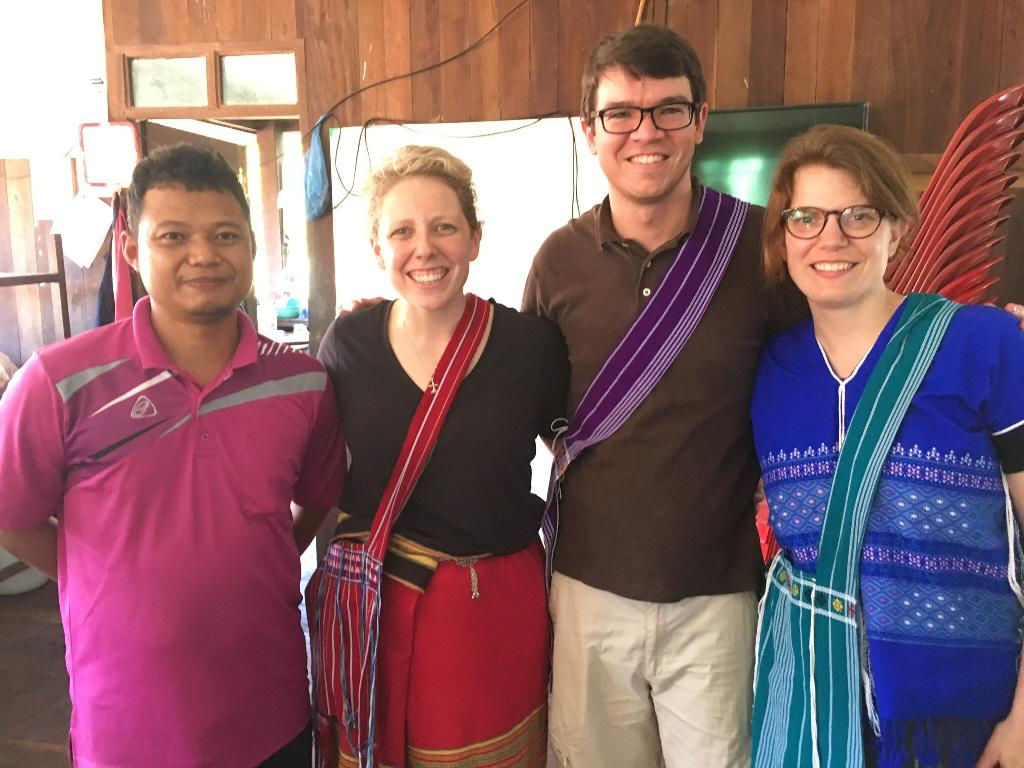 Some of the best things in life are the things you don’t plan for. That pit stop that turns into a favorite eating spot. The child who wasn’t planned. Surprises become something special.

It’s in the nature of short-term mission trips to require flexibility, and that’s no different here in Thailand. When you’re making a two day journey into the jungle, you really don’t know what to expect, despite all the planning that goes into that. When we arrived at Laytongku this past Monday we found out at least one thing had changed: our pastoral training would begin one day later. To boot, they had planned two days of training that went from 6:30am to 8:30pm. Whew! Our teaching team quickly got to work adapting our materials for the time available.

In a really special moment for us that evening, we sat down with one of the

local pastors – Lahthaw – who shared with us his own struggles and anxieties as a pastor. He was called into ministry after denying the call three times, something he connected to Peter’s denial of Christ. He had only been a pastor for two years and was about our age – 32. When I asked him if he felt confident in his ministry, he averted his eyes and was silent as he appeared to struggle for words. He said only, “It is very hard…” His vulnerability set the tone for us, helping us to see our role as encouragers.

The next day, since the pastoral training was delayed a day, we were all able to come to the local school together for English training.  Again, some surprises met us. We had been told to expect up to 400 students, but were

relieved to find a much more maneagable group of 100-200. They were eager to learn and soon warmed up to the big “sarongs.” But as we finished we learned some disappointing news: we would not be able to do the additional two days of English training we had hoped. The next day an official was arriving on a helicopter to inspect the school (surprise!) and the day after happened to be a holiday. The English team would have to find some alternative ways to help.

The pastoral training began apace early the next morning. We shared on topics ranging from confidence and conflict to disciple-making and parables over the next two days. Worship services and impromptu singing wove through our times of learning. On our second after

noon we visited the local head man (who doubles as a powerful religious leader) and watched as these pastors witnessed to him. It was pretty special for us to watch them be so bold. The learning was going both ways. How could we imagine ourselves witnessing to our commmunity leaders in our own context?

While the pastoral team taught, the rest of our team ventured into Burma and visited a village there. The English team were able to give an impromptu English lesson at the school (surprise!) and spent some time with villagers. Our medical team shadowed the medics stationed here and provided additional help and training for them. It was great for them to see how conditions were improving since the ceasefire agreement two years ago. Hopefully we end up doing more work there in the future if conditions remain stable. Besides that visit the rest of the team were able to do much needed organizational work around the clinic. Even though they weren’t able to do the work at the school in Latongku they gave needed support for the work of the Thai Christian Foundation.

Our final morning in Latongku was a whirlwind. After a final two hours of training we had some “closing ceremonies.” Megan and I handed out certificates, pausing to take a picture with each student has they received it. The certificates seemed cheesy to us, but they had a great meeting to our students. Later, we learned that an older woman was overheard saying, “I will never be able to go to America, but America has come to me and now I have the certificate to show.” She said this with tears in her eyes. The Karen people greatly value education, but their opportunities are few. For us to come and share meant that their confidence in their ministry could be bolstered simply by our presence, not to mention our training. It was an affirmation for us to see that our hope to encourage these pastors had come true.

We all had lunch with Lahthaw and his elders after that. Chapel Hill has supported the hostel for children that Lahthaw’s church manages, and they

were eager to show their appreciation with a cake (made in a village with no ovens!) and a song. Surprise after surprise. Blessing after blessing.

After a long drive we are now resting for a day in Mae Sot before continuing our journey to Bangkok. I think all of us are tired (and grateful to rinse off four days of dust with a hot shower). But there is so much to be thankful for as we reflect on what God has done this week. We had made our plans, but he is the one who arranged our way.
Blessings,
Pastor Larry

For MORE photos of our trip, feel free to browse them here: https://goo.gl/photos/ceSNSdEoHxbmAnXc8